We are delighted to share that BAPS Swaminarayan Sanstha (BAPS) is presenting a free three-part mini-course on parenting titled ‘Parenting from the Bhagavad Gita: What Can Krishna and Arjuna Teach Us About the Parent-Child Relationship?’

Each session will be about half an hour only, and will premiere fortnightly on YouTube – accessible directly from neasdentemple.org.

The first part of the course will be available from 7.30pm BST on Tuesday 21 September 2021. Join us!

The mini-course forms part of the ‘Timeless Hindu Wisdom’ web series, a popular series of talks delivered in English by the learned swamis of BAPS.

With years of study and practical experience of Hinduism, the swamis also include those who had previously graduated in a variety of academic fields from some of the top universities in the world, including Oxford, Harvard, Yale and Georgetown.

The series began in April 2020, at the onset of the coronavirus pandemic, and has continued to help thousands with more purposeful daily living. 18 months on, it remains consistent in its aim: to deliver practical guidance from universal Hindu teachings in a relatable, bite-sized format.

About the Speaker: Pujya Brahmasetudas Swami 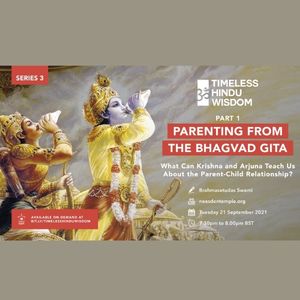 Register to participate online for free at https://www.eventbrite.co.uk/e/breaking-barriers-to-trade-womens-entrepreneurship-tickets-450534620177